Where Does Most Microplastic Pollution Come From?

It’s no secret that our seas and oceans are inundated with plastic waste. From the Great Garbage Patch in the Pacific Ocean to the millions of bottles, straws and other commodities washed up on the world’s beaches, trillions of pieces of plastic enter the ocean each year. Aside from these larger items, there is also a multitude of much smaller contaminants – no bigger than 5mm in length – known as microplastics.

Generally speaking, there are two types of microplastics: primary and secondary. The former are integrated into the design of commercial products, such as the microbeads in cosmetic items or the polymers which make up clothing and other textiles. The latter are those which break down from larger plastic items over a long period of time, such as the dust which erodes from tyre rubber or the disintegration of bottles and the suchlike. But what is the primary source of microplastic in our oceans?

Surprisingly, the main contributor to ocean microplastic pollution does not appear to be any of those mentioned above. According to the findings of a new study from Swiss consultancy group Environmental Action, it’s actually paint which is the chief source of microplastics in the environment. Polymers such as polyesters, polystyrenes and polyurethanes are contained in all types of domestic, commercial and industrial paint.

Over time, these can be worn down by the elements and erode from the surface that they adorn, posing a dangerous risk to the environment. This includes the paint which is used on the external facades of buildings, but also that which is used on offshore oil rigs, shipping tankers and other seagoing vessels and structures. Meanwhile, improper waste disposal methods can also contribute to microplastics from paint in the seas and oceans.

The research, which was published last month, employed a variety of sophisticated monitoring methods and found that almost two million tonnes of paint find their way into our rivers, streams and seas each year. That’s over half (58%) of all microplastic waste in the ocean, meaning that the contribution of paint outweighs that of all other sources put together, including tyre dust and textile fibres.

The results are in stark contrast to previous studies on the subject, which assumed that paint accounted for an absolute maximum of 21% of oceanic microplastics. The authors believe that the biggest contributing factor to this paint-derived pollution is leakage caused by waste mismanagement, while the wear and tear of the aforementioned offshore ships and structures contributes up to 18%.

Of course, it can’t simply be claimed that because of the microplastic pollution it creates, paint is inherently bad for the planet. Indeed, the protective properties of the paints used at sea are integral to maximising the lifespan of the vessels and structures in question, which saves a significant volume of emissions in terms of maintenance, repair and replacement. As such, the question is more nuanced than it may appear at first glance.

Nonetheless, there are those, such as Declan McAdams, the chairman of the organisation which commissioned the study, who believe it should serve as a wake-up call to the industry. “We need a systemic change in the use and management of paint, now that these findings have shone a light on the extent of the pollution being caused,” he explained. “We warmly welcome the recent decision by the EU Commission to turn their attention to paint as a source of microplastics. This is a big step in the right direction.”

The island archipelago of the Maldives is the worst location for microplastic pollution in the world, according to a new study from Flinders University in...

Where Is the Worst Location for Microplastic Pollution? 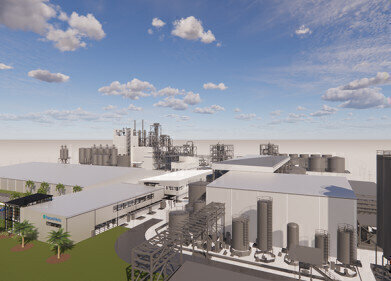 ABB has been awarded a major contract by NatureWorks, the world’s leading manufacturer of polylactic acid (PLA), a low-carbon bioplastic made from renew...