In Liquid Air Energy Storage (LAES), liquefied air is produced on a liquefaction unit and stored as a cryogenic liquid in highly insulated tanks. The production of liquid air can coincide with periods when there is excess renewable power available in the grid, such as overnight when the wind is blowing hard and consumer demand is low or during peak sunlight hours in the middle of the day. When the grid requires support, such as on days where there is little wind or solar power generation the liquid air is pumped to a high pressure, vaporised, and released to an expansion turbine, which generates electricity for the grid.

Variable renewable energy is making an increasing contribution to power generation. In parallel, the ‘electrification of everything’ is a fundamental mantra of decarbonisation. These aspects combine to mean that long-term, high-capacity energy storage will become essential to balance supply and demand on the power transmission grid. LAES is emerging as a high potential clean energy storage technology for this purpose.

LAES Demonstration plant in the UK
The world’s first LAES demonstration plant was built by Highview Power at the Pilsworth landfill waste management site close to Manchester in the UK. The LAES plant commenced operations in 2018 with the intent of offering short-term balancing services and supporting the grid during winter demand peaks. To maximise energy efficiency, waste heat from gas-engines is used to vaporise the liquid air. The gas engines are fired by landfill gas, which is rich in methane.

Highview Power has since announced two commercial scale units for Vermont in the USA and Carrington in the UK. Each will have the capability to generate 50MW of power and will have energy storage capacity exceeding 250 MWh.

Power and energy storage technology selection
The most suitable technology for power or energy storage depends on the required duration, release rate and storage capacity. Ultra-capacitors and flywheels can release small amounts (Kilowatt-hour, or kWh) of power within seconds. Batteries come in to play for storing moderate (Megawatt-hour, or MWh) of power to be released over a few hours.

Compressed Air Energy Storage (CAES) works in a similar way to LAES, but air is simply compressed into a very large storage chamber such as an underground cavern and then released through a turbine. In CAES, no liquefaction of the air takes place. CAES and pumped-hydro schemes can release several Gigawatt-hour (GWh) of power over a period of hours.

Underground storage of hydrogen (UHS) in salt caverns is effective when Terawatt-hour (TWh) of energy storage is required for release on a seasonal basis. Air Liquide and Linde operate UHS facilities in Texas to balance their hydrogen pipeline supply schemes to customers. The Linde cavern at Moss Bluff can store 6,000 tonnes of hydrogen, the equivalent of 2 weeks production from a large steam methane reformer.

The need for LAES in the energy storage mix
LAES fits into this continuum of energy storage technologies close to the middle, with a similar profile to CAES or pumped hydro power storage. The advantage that LAES has over these technologies is that it can be implemented in almost any geography. Pumped hydro requires suitable contours in the natural geography to enable water to be stored in two nearby lakes with a suitable height difference. CAES can only be implemented at large scale where the underground geology allows cost-effective creation of a compressed air storage cavern.

As with the storage capacity continuum, LAES lies around the mid-point of these efficiency and capex metrics. The round trip efficiency can be as high as 70% if the heat energy required for vaporisation of the liquid air is available from a nearby ‘waste-heat’ source, such as a combined heat and power plant.

Whilst UHS in salt caverns offers low-cost, low-carbon, seasonal energy storage at utility scale, it has a low round-trip efficiency (MW power required for electrolysis compared to MW power generated on a turbine or fuel cell) in the order of 40%. On the other hand, ultra-capacitors have a very high round trip efficiency at about 95% but discharge their entire stored energy within minutes, leak around 10% of their stored energy per day and their capex cost is about 100,000 times more than underground hydrogen storage, per unit of energy stored. 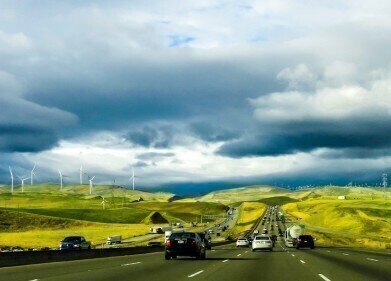