As the year’s premier climate event has drawn to a close, it’s time to reflect on the possible progress made and the work that lies ahead. COP27 took place in Sharm El Sheikh in Egypt – the first such conference to be hosted in Africa for six years – and welcomed 35,000 attendees through its doors over the course of its 13-day duration.

But which world leaders made the trip to Egypt? Who were the major players in leading climate talks in 2022? Were there any other public figures who put in an appearance at Sharm El Sheikh? And which policymakers and politicians were notable by their absence? We take a look at the list of attendees for COP27 in greater detail below.

The venue for the 27th Conference of the Parties on the UN Framework Convention on Climate Change was significant; it was only the third time that Africa had hosted the event and came at the close of a year in which at least 17 million Africans were exposed to the ravages of extreme weather events and the famine that they precipitated.

As such, it’s no surprise that African leaders took centre stage. As well as Egyptian President Abdel Fattah el-Sissi and Minister of Foreign Affairs Sameh Shoukry, there have also been impassioned speeches from Rwandan Premier Paul Kagawe and Senegalese President Macky Sall. Other vulnerable nations had their say, too, with Tuvalu calling for a binding agreement to phase out fossil fuels and Barbados hailing the inclusion of “loss and damage” talks on the agenda.

Meanwhile, the world’s biggest emitter of carbon emissions from a historical perspective – the USA – was well-represented, too. Not only did President Joe Biden make the trip, but so too did climate envoy John Kerry. Elsewhere, Indian Prime Minister Narendra Modi and newly-elected Brazilian President Lula also descended on Shark El Sheikh for the conference.

Conspicuous by their absence

Despite that roll call of famous faces, there were plenty of household names who did not make the trip. Russian President Vladimir Putin, who has been something of an international pariah since his country’s invasion of Ukraine, was not there and his Chinese counterpart Xi Jinping did not attend either. Although China has made strides on following the advice of scientists to slow climate change, recent tensions with the US have stalled negotiations and it continues to rely heavily on coal for its power consumption.

Other disappointing absentees included Australia Prime Minister Anthony Albanese and Canadian Premier Justin Trudeau, who have decided to take a backseat at this year’s event. King Charles III also stayed at home, apparently on the advice of the UK government, while climate activist Greta Thunberg boycotted the event due to concerns over “greenwashing” without taking concrete action.

With the dust now settled on the Conference of the Parties’ latest summit (COP27) for another year, it’s time to take a step back and survey the progress... 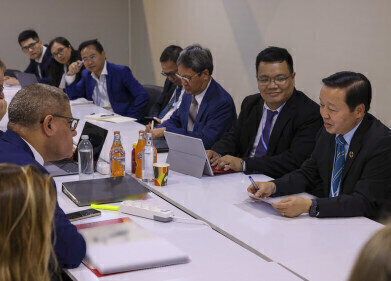 Now well into its second week, the 27<sup>th</sup> annual Conference of the Parties (COP27) at Sharm El Sheikh in Egypt has welcomed some 35,000 delegates, i...