Currently, over two million people live in countries where water supply is inadequate and it is predicted that half of the world’s population could be living in areas facing water scarcity by as early as 2025. This seems almost inconceivable considering that 71 percent of the Earth is covered in water, however only 3 percent of that is freshwater. It is therefore safe to say that we are facing an imminent global water crisis and increased development of sustainable technologies for non-conventional water resources is essential.

Desalination
One important tool in the fight against water scarcity is desalination, which refers to the process wherein the dissolved mineral salts in water are removed. At present, this process can be applied to both seawater and brackish water and is one of the most used to obtain freshwater for human consumption or agricultural purposes in arid regions. According to the International Desalination Association (IDA), there are approximately 18,000 operational desalination plants worldwide, generating an estimated 80 million m3/day of freshwater. The world’s largest user of desalination is Saudi Arabia, which has around 33 desalination plants. Not far behind is the United States, with 10% of the total desalination plants, and Spain with 5.7%, more than half of the desalination plants in Europe.

However, the major environmental costs of desalination have made it a controversial technology. It is a very energy intensive process, with the potential to increase fossil fuel dependence, greenhouse gas (GHG) emissions, brine production and waste disposal. It therefore comes as no surprise that renewable energy powered desalination has come under increasing focus and development in recent years.

Solar desalination
R&D into renewable desalination is most prominent in arid areas, such as the MENA region (Middle East and North Africa). It therefore makes sense that solar power is the most common renewable source for desalination in these countries where there is huge solar energy potential.

PV RO is one of the most common forms of solar desalination due to the modularity and scalability of both photovoltaic (PV) and RO systems. RO is also considered to be much more efficient than thermal desalination, despite the need for water pre-treatment. The main challenges for PV RO include cost and reliability. However, decreasing PV panel costs are making solar-powered desalination increasingly feasible.

The drivers of this technology
With more than fifty years of experience in this area, Spain is a pioneer in the process of water desalination. The first European desalination plant was installed in Lanzarote in 1964 and Spain currently has a total of 756 desalination plants, producing around 5,000,000 m3/day of desalinated water. It is not only a world leader in terms of installed capacity, but in terms of the strength of its industry. Spanish design, construction and operation companies, consultants, suppliers and research centres are driving desalination practices worldwide. In fact, it is predominantly Spanish companies that are leading desalination in the Middle East. An example of this is the company ACCIONA, which has constructed six desalination plants in Saudi Arabia, three of which have already been completed (Al Kohbar-1, Al-Khobar-2 and Shuqaiq 3).

The future of desalination
In 2021, the company Solar Water PLC installed a ‘solar dome’ in Saudi Arabia, as a form of concentrated solar power (CSP) technology, surrounded by heliostat reflectors that focus solar radiation inwards. The heat is transferred to seawater within the dome, which evaporates and then condenses to form freshwater. It does not use polluting fibres that are typically used in RO and is said to be a low-cost and fast technology to build, as well as being carbon-neutral.

There has also been increasing development of hybrid desalination systems, combining two or more desalination technologies in order to achieve comparative advantages of these technologies. It is evident that there is still a lot to be done in terms of increasing the efficiency, scalability, cost, membrane technology and so forth, but if it continues on its current trajectory, solar desalination could well play an essential role in fighting the inevitable water crisis we are facing. 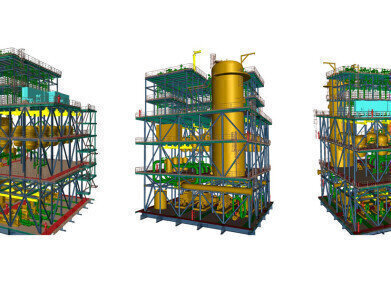