Microplastic pollution may be having a devastating impact on mites, springworms, ringtails and other microscopic organisms which live in soil. Although these tiny creatures are all but invisible to the naked eye, they play a crucial role in processing elements like carbon and nitrogen, as well as breaking down organic matter so that it can be consumed by soil-dwelling bacteria.

In a first-of-its-kind experiment from China, researchers demonstrated that high concentrations of plastic could decimate the populations of these kinds of soil species, thus negatively affecting the fertility of the land. The findings of the study are just one more reason – as if another was needed – for the human race to curb its damaging addiction to plastic and improve disposal habits of the ubiquitous material.

Did you know that there are more living organisms in a single teaspoon of soil than there are people in the whole world? What’s more, these tiny creatures are integral to the foundations of all life on the planet, keeping soil fertile and allowing it to act as a natural filter for water and a medium in which to cultivate crops, trees and other plant life.

Although mites, larvae, microarthropods, nematodes, fungi and bacteria are all crucial to the ongoing survival of the human race itself, our understanding of how they are affected by our littering habits is not yet well developed. In order to remedy that fact, a team of scientists from Jinfoshan in the Chongqing region of China conducted research into how highly dangerous microplastics impact upon these diminutive species.

The team undertook their experiment by deliberately polluting four tranches of subtropical land with differing amounts of microplastic pollution, namely 0g, 5g, 10g and 15g per square metre of polyethylene fragments. After leaving the microplastics to seep into the soil for a period of 287 days, they then tested each plot to determine how well the microorganisms had survived the plastic onslaught.

In the area containing the greatest concentration of polyethylene, they found huge declines in a wide variety of species. Ants were down by 62%, while moth and butterfly larvae fell by 41% and fly larvae dipped by 30%. Nematode populations were also negatively affected by as much as a fifth, while the most common species – oribatid mites – dropped by 15%. Although both bacteria and fungi did not seem to be affected, the impact upon other organisms was great enough to cause a significant change for the worse in the ecosystems of the soil.

While the human race continues to battle against coronavirus, it seems as though soil species are facing a pandemic of their own in microplastic form. In the last 70 years, we have manufactured 6.3 billion metric tonnes of plastic, a mere 21% of which has been successfully recycled. The vast majority of that waste finds its way into seas and oceans or else ends up in landfills, where it can cause irreparable damage to the soil and the organisms living there.

It’s no wonder that scientists are calling for us to go plastic-free in order to safeguard the planet we live on. Not only will transitioning away from this persistent substance help to alleviate the great strain being placed upon Mother Earth in terms of soil and water pollution, but it will also help to curb the emissions created during its manufacture, thereby mitigating the problem of climate change. 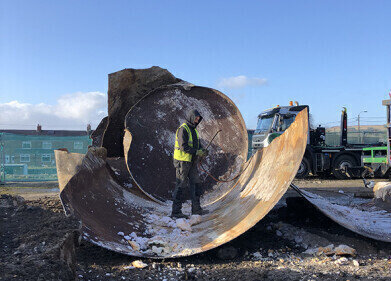